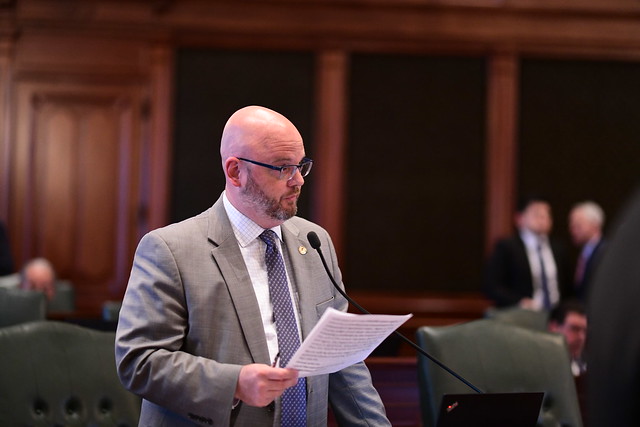 The House of Representatives voted today to legalize recreational cannabis for adults age 21 and over. After thoughtful consideration of arguments on both sides of this complex issue, I decided to vote No for a variety of reasons. You deserve to know why.

First, from a personal standpoint. My father was a user of cannabis, and I witnessed the detrimental impact his dependence on it had on our family and his own health. I know I am not alone. Many families have been devastated by various forms of substance abuse in the home, including cannabis. Several local residents in our community shared their personal story with me in recent weeks of how cannabis has affected their family, which I found to be both heartfelt and persuasive.

Secondly, from a law enforcement standpoint. Both the Illinois Sheriffs’ Association and the Illinois Association of Chiefs of Police took part in negotiations on the bill, but said their concerns were largely ignored. They cited studies in states with legalized recreational cannabis showing significant increases in the number of traffic accidents in which drivers were under the influence of cannabis. Police have said that the legalization bill does not provide sufficient safeguards to discourage impaired driving.

Thirdly, from a process standpoint. The effort to pass the legalization bill was rushed through. The mindset of the sponsors appeared to be “let’s pass this right now and work out the problems and unintended consequences later”. Good public policy and effective laws are not made that way. I am one of 61 House members (a majority of the body), who signed on as co-sponsor of a resolution saying that we should take the time needed for lawmakers, stakeholders, public health experts and others have the chance to consider the societal impact of legalization and examine all the data from other states that have passed similar legislation. This resolution was introduced by Democrat Representative Marty Moylan and had bipartisan support from across the state. It is HR 157.

With all this said, I found compelling the argument made by those who assert that cannabis has been over-criminalized. Statistics show that roughly 800,000 people in Illinois have been convicted of a cannabis-related offense, crowding our prisons and clogging our courts. Many of these convictions are for minor possession offenses of a small amount of cannabis. One positive aspect of the legalization bill is that it affords justice to these individuals.

Despite my opposition to the legalization bill that we ended up with, I am in strong support of expanding Illinois’ medical cannabis law and making it permanent.  I am co-sponsor of the bill to do just that, House Bill 895. This bill would expand the list of qualifying conditions to include osteoarthritis, Chron’s disease, colitis, autism and chronic pain, among other conditions. For a good recap of this issue and the bill I’m co-sponsoring, please read the Chicago Tribune article by clicking HERE.

In closing, I would like to thank everyone in the 70th District who took the time to give me their input in on the legalization of recreational cannabis over the past several days and weeks. People on both sides of the issue made valid points and helped to inform my understanding of this issue beyond my own experiences. Ultimately, my vote was determined by the variety of factors I outlined above. Now that the General Assembly has voted to legalize, I pledge my support for doing everything within our ability to make sure the law is implemented in a way that minimizes any negative impact on our youth and supports the efforts of our law enforcement agencies to combat impaired driving on our roadways.