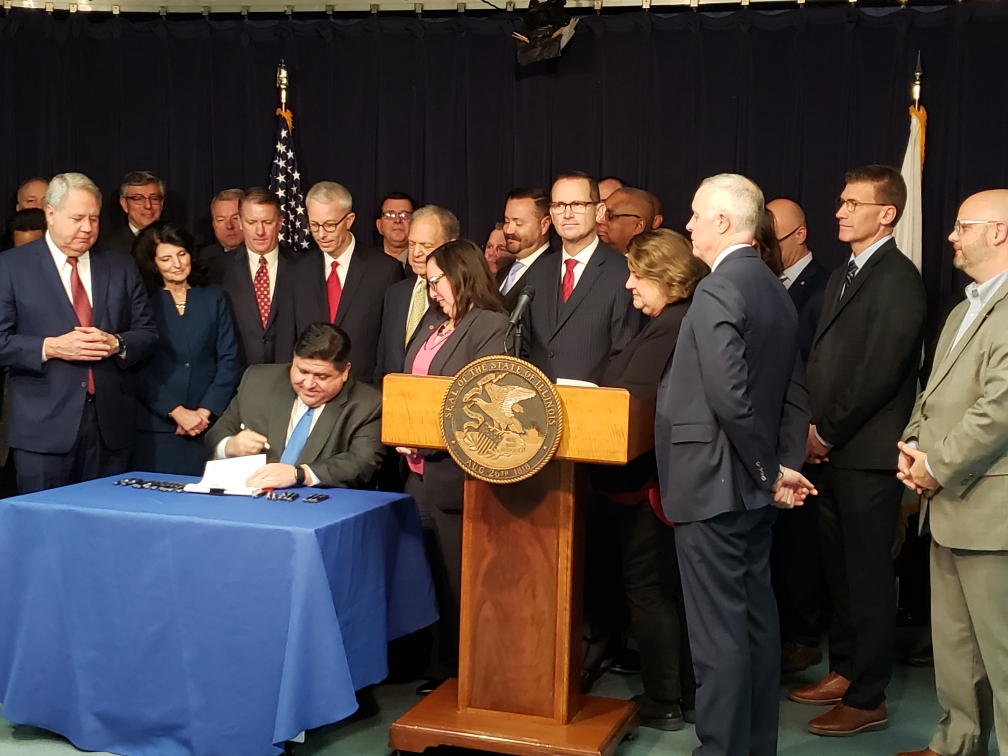 State Representative Jeff Keicher (R-Sycamore) joined Governor Pritzker and a bipartisan group of lawmakers on Wednesday to celebrate the signing of SB 1300, a bill that consolidates the investment function of 649 suburban and downstate police and fire pension systems into two systems. By consolidating the smaller systems into two larger systems, investment returns are expected to grow by billions over the next ten years, administrative costs will drop significantly, and taxpayers could end up paying less to support local pensions for first responders.

“This was a true bipartisan effort that was decades in the making,” said Keicher. “I spent time this spring learning from a long time champion of this idea, Representative Mark Batinick about the benefits to all parties on this concept.  After years of inaction and bills that didn’t gain traction in prior General Assemblies, the bipartisan Pension Consolidation Feasibility Task Force brought forward a solid recommendation that these systems be consolidated.  Republicans and Democrats worked together to pen legislation that received nearly 100 bipartisan votes in the House.”

The task force’s report estimated that over the next five years, consolidation could lead to an additional $820 million to $2.5 billion in investment returns alone, which could mean lower contributions funded by property taxes. According to most recently available estimates, Illinois’ downstate and suburban police and fire pension funds are underfunded by $11 billion.

“With 649 separate pension funds, Illinois has the second-highest number of pension plans of any state in the country,” added Keicher. “When held and managed separately, these funds earn significantly lower investment returns than larger pension plans. While there remains much more work to be done, today’s bill signing represents a great step forward in addressing the state’s pension crisis.  Today was a win for the Illinois taxpayer.”