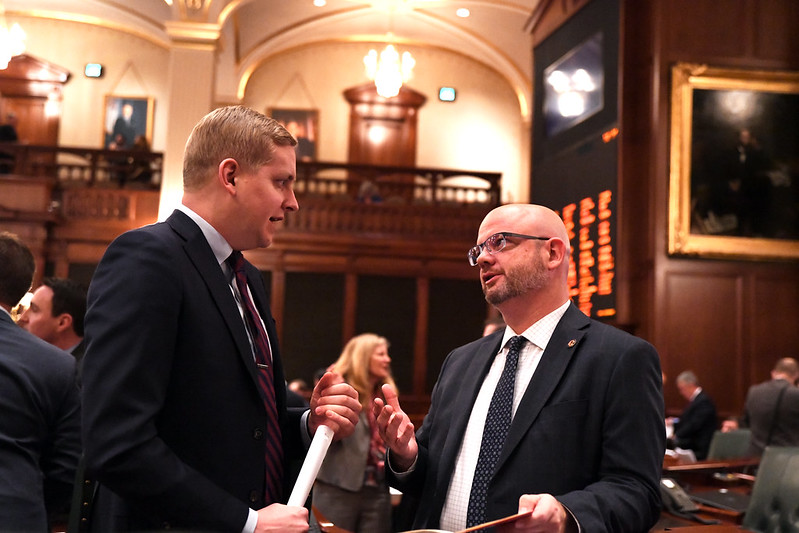 As published in the DeKalb Daily Chronicle

It’s no secret that our state has not been friendly to workers and businesses, small and large. Illinois has been consistently ranked as one of the worst states to start or grow a business, partially due to rising taxes and increasingly burdensome regulations. That may partially explain why our state continues to lose population, but we’re here to tell you there is real, meaningful economic development happening right here in our communities.

Consider the “Project Hammer” announcement made on January 31st. The Ferrara Candy Company, a global candy manufacturer headquartered in Chicago, announced their plan to relocate and expand their Illinois operations to DeKalb, and with it, adding 500 new jobs to our local economy in the first phase of their investment, with the potential for at least 500 more in the very near future. Ferrara is on a fast timetable, too. They plan to be fully operational by the second quarter of 2021.

Now, why would a multi-billion dollar manufacturer choose DeKalb over a city in Wisconsin, a neighboring state that’s commonly considered to be more business friendly than Illinois? We know our area is home to a high-skilled workforce, great educational institutions like NIU, and great road and rail infrastructure, but what brought DeKalb over the finish line?

The answer? The hard work of DeKalb City and County officials who were empowered with several economic development tools, including new tools like the historic capital program and House Republican-sponsored, job-creating reforms, helped bring these new jobs to DeKalb.

The capital program invests nearly $45 billion in our state’s infrastructure over the next six years, and a significant amount of those funds will go to projects in our area. Without a doubt, those funds, including specific initiatives we sponsored, are already helping facilitate economic development locally. The capital program funds a portion of the road infrastructure projects immediately surrounding Ferrara’s project site at the WestChicago Business Center.

And the pro-business reforms – the Blue Collar Jobs Act, reinstatement of the Manufacturer’s Purchase Credit, repeal of the Franchise Tax, and more – are encouraging Ferrara and other businesses to make major financial investments in our state. Those reforms exist today thanks to the persistence of House Republicans in negotiations over the budget and capital program. We would not have supported either of those measures unless Democrats agreed to significant job-creating reforms, something our state has not seen for quite some time. To their credit, Governor Pritzker and Democrats in the majority agreed and signed off on our job-creating reforms.

Most importantly, we’d like to recognize all of the work state and local officials did in securing this project. Paul Borek of the DeKalb County Economic Development Corporation, DeKalb City Manager Bill Nicklas, and DeKalb Mayor Jerry Smith did a fantastic job showcasing DeKalb as the ideal location for this major investment. Without a doubt, their efforts amount to the lion’s share of the work it took to secure these new jobs. Staff at the Illinois Department of Commerce and Economic Opportunity were greatly supportive as well.

Even though there is a lack of progress on many pressing issues facing our state, bipartisanship, compromise, and the diligence and hard work of local officials resulted in 1,000 new jobs for the people of DeKalb, with the potential for more to come. That is something to celebrate, even if you are dissatisfied, as we are, in the current condition of our state. Just one new job has the potential to transform a life and a community. That’s why creating new, good-paying jobs is one of our top priorities.

This year, let’s build on that bipartisan progress to enact additional job-creating reforms so we can empower local officials with even more tools to attract even more investments. It is our hope that both parties – Republicans and Democrats – will come together, compromise, and enact long-overdue reforms to grow our communities and our state. The people of Illinois deserve nothing less, and the future of our state depends on it.