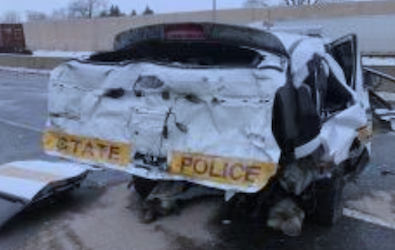 Wreckage from the crash involving an Illinois State Police cruiser on Feb. 15 in which a trooper suffered life-threatening injuries.

Another Illinois State Trooper was critically injured in a crash along I-55 on Monday, marking the sixth Scott’s Law related crash so far in 2021 involving the Illinois State Police; and the second in two days. Amidst this ever-present danger on Illinois roadways, the Move Over Task Force delivered a report on February 11 detailing their study of the causes of Move Over crashes and violations and proposing ways to protect law enforcement, emergency responders and all motorists.

The Move Over Law, also known as Scott’s Law, requires drivers to change lanes when approaching stationary emergency vehicles, including all highway maintenance vehicles displaying flashing lights, and any stationary vehicle with their hazard lights activated.  The law also states, if changing lanes is not possible or unsafe, drivers are required to proceed with due caution, reduce the speed of the vehicle and leave a safe distance until they have safely passed the stationary vehicle.

“Monday’s crash along I-55 is another tragic reminder of how fragile life is and how every person who gets behind the wheel has a responsibility to take Scott’s Law seriously,” said State Rep. Jeff Keicher, R-Sycamore. “I urge local residents to consider their own driving habits and – if they have a new driver in their home – to sit down with their teen or young adult to talk about Scott’s Law and how we can all keep each other safe on the road.”

The Move Over Task Force was formed in the wake of the roadside deaths of two Illinois State Police (ISP) Troopers Brooke Jones-Story and Christopher Lambert in 2019. The crashes were the result of motorists’ failure to comply with the Move Over law. Comprised of 17 members and chaired by Illinois State Police Director Brendan F. Kelly, the task force met five times throughout 2020 to find ways to educate drivers, promote compliance and prevent further tragedies.

The Move Over Task Force recommendations include:

In 2019, the Illinois State Police reported 72 squad car crashes, with 27 of those crashes related to Move Over violations. The ISP issued 6.570 citations and 3,627 warnings statewide for Move Over violations in 2019. To see details on Move Over crashes involving ISP personnel, please go to: https://isp.maps.arcgis.com/apps/MapJournal/index.html?appid=8fbb1df8739049029a01443f844d1934