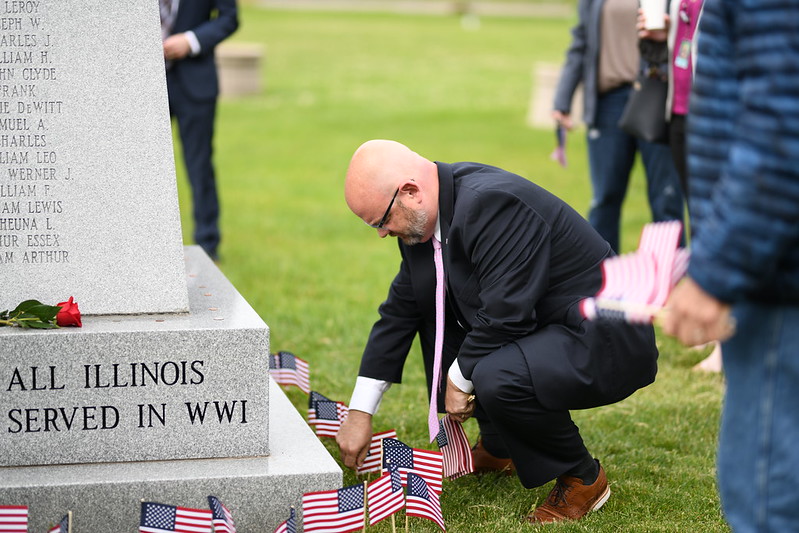 The United States Department of Defense has awarded a Certificate of Appreciation to State Rep. Jeff Keicher, R-Sycamore, in recognition of “his leadership on public policy changes positively impacting the quality of life of Service members and their families residing in Illinois, during the 2021 Legislative Session.” The award was presented by Patricia Montes Barron, Deputy Assistant Secretary of Defense for Military Community and Family Policy.

“I cannot say enough about the sacrifice military families make for each and every one of us on a daily basis and how much we owe them,” said Rep. Keicher. “In accepting this award, I pledge to continue dedicating my efforts in Springfield toward improving the quality of life for military families, their children, and veterans throughout the State of Illinois.”

Among Rep. Keicher’s legislative accomplishments on behalf of the military community and veterans in 2021 was passage of a new state law, introduced as House Bill 557, which allows students who are a dependent of active duty military personnel to enroll in school sooner than state law previously allowed when the family relocates per military orders. Specifically, the new law requires school districts to permit a dependent of U.S. military personnel to enroll free of tuition if, at the time of enrollment, the child is in temporary housing outside of the school district but will be living within the district within 6 months. As often as some high school juniors and seniors have to move to a new high school, they were not always able to get access to classes they need to graduate on time if those are full and stay on track for college.

“We’ve seen too many military dependents not be able to graduate with requirements on time because they couldn’t register early enough for required classes in a new school when the family is transferred to a new duty station,” Rep. Keicher said. “With our new law having gone into effect in 2022, we’ve removed this obstacle for students who have a parent or guardian serving our country in the U.S. Armed Forces.”

In April 2021, Rep. Keicher passed HJR 10, a resolution urging the Illinois State Board of Education to establish and manage a program designating Purple Star Schools in Illinois, which would direct public schools to support the unique educational and social-emotional needs of military-connected children by (1) Designating a staff point of contact for military students and families; (2) Establish and maintain a dedicated page on its internet website or a location in the school’s administrative office featuring information and resources for military families; (3) Maintain a student-led transition program to include a student transition team coordinator; and (4) Provide professional development for additional staff on special considerations for military students and families.

On veterans’ issues, Rep. Keicher filed House Bill 1963, which would provide a property tax exemption for veterans with a service connected, permanent disability of at least 60%. That legislation remains in committee awaiting a hearing. Rep. Keicher passed HR 168 commemorating the 100th anniversary of DeKalb American Legion Post 66 in 2021 and recognizing the Post on their years of service to the community.