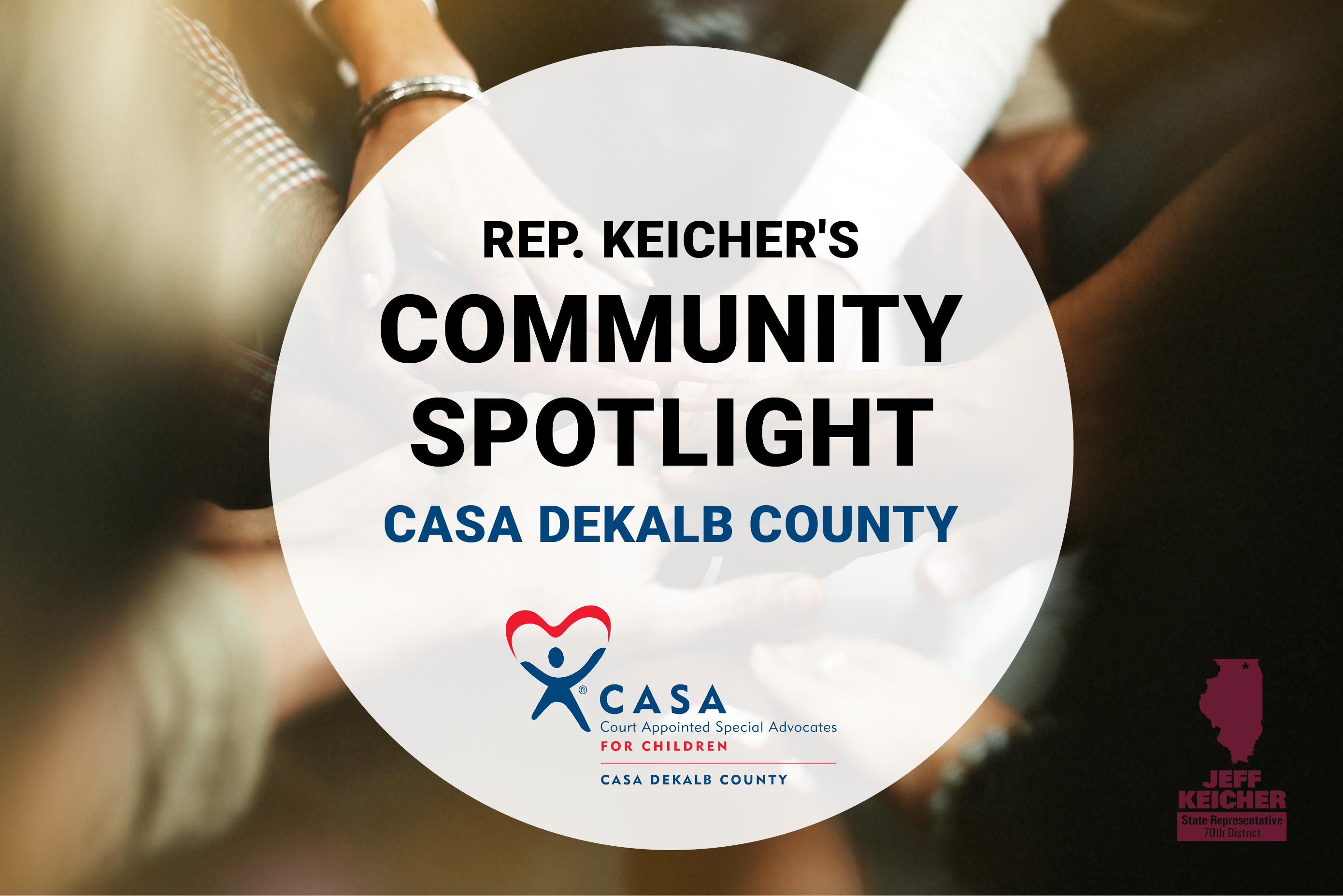 The area within Illinois’ 70th district has a diverse group of volunteer organizations that work hard every
day to make a positive impact on our communities. This summer, I thought I would have my team reach
out to some of them to acknowledge the great work they are doing and see how I could help them
continue to serve our region.

That spotlight has shone on the Court Appointed Special Advocates of DeKalb this week. After my office
reached out to their staff, they heard an unfortunate statistic right off the bat: about 200 children in
DeKalb County go through the court system every year after suffering from neglect and abuse in their
homes. This statistic is heartbreaking to hear, especially considering the fact that there seems to be no
attainable solution to the root problem. Even so, I think CASA may provide a light at the end of the tunnel
for one of the most difficult times in these kids’ lives.

Jessica Sandlund–the Development and Recruitment Manager for CASA’s DeKalb location–indicated on
the June 7th call that CASA trains volunteers to be the voice in the courtroom for the youth of our nation
who, otherwise, would have a much more difficult time letting a judge know what they want to see in
their future. This is outlined, on our local level, in what she referred to as a “Memorandum of
Understanding” between CASA DeKalb County and the DeKalb County Circuit Court.

I can’t understate the effect of this. The volunteers of CASA DeKalb County are predominantly taught to
bridge the gap between every child in those 200 cases I mentioned earlier and their court proceedings.
After conversations with each child to gauge what is in their best interest, a CASA volunteer can advocate
on their behalf through suggestions made to the relevant judge. Of course, a line of communication stays
open between the volunteer and child throughout the whole ordeal. This is proven through studies to
result in the child finding a suitable, permanent home more often, allowing them to succeed in school at
higher rates, and be half as likely to re-enter the foster care system than if CASA wasn’t involved.

Jessica also narrated a story that sums up the work they do quite nicely: “CASA was formed because a
Seattle judge noticed that, while there were so many people involved with these cases, none of them
seemed to be providing the child’s input.” I believe CASA provides a much-needed fill to that void in our
modern court system. No child should be susceptible to having their livelihood altered by someone who
doesn’t have all of the possible facts.

While CASA DeKalb County has historically been able to help every case assigned to them,
unfortunately, Jessica did mention that the lack of volunteers as of late has made it much harder in recent
times to continue doing that. As such, if you are interested in assisting CASA with its goal of making sure
that every child finds the safe home they deserve, feel free to reach out to them for more information
about working with them towards fulfilling their mission:

Volunteering is, understandably, not possible for everyone. There are other ways you can still support this
cause, should you feel so inclined. For example, their annual “50 Men Who Cook” fundraiser coming up
on August 13th. With local chefs cooking up some tasty food, it’s a great way to have a good time while supporting an even better cause. You can learn more from their website located here.

Additionally, if like myself, you feel as if their work is a blessing to our next generation, you can flat out
give them a donation. The money that you donate will, primarily, go towards the recruitment, training,
and supervision of its volunteer advocates.

I would, finally, just like to extend my thanks to CASA for their wonderful work and to anyone else who
is contributing to their cause.