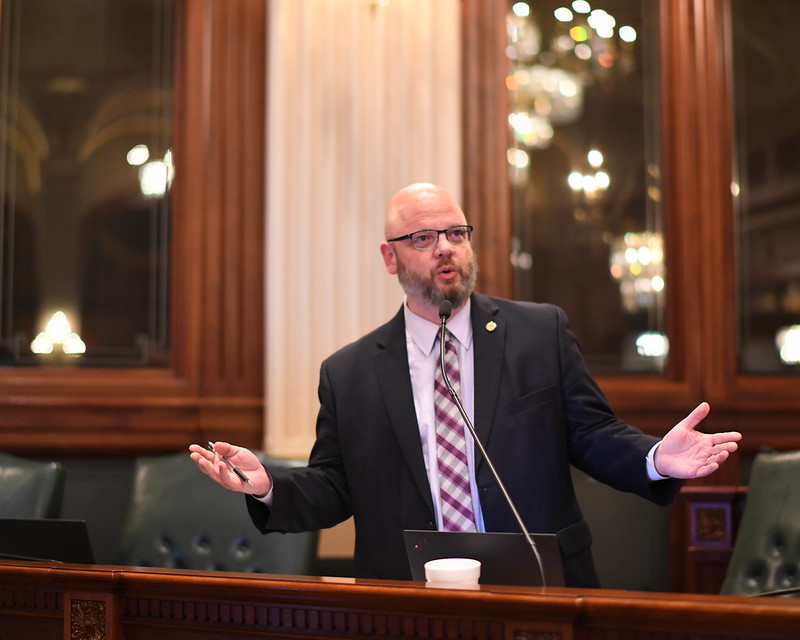 “I argued strenuously against passage of this bill because rural property owners in Illinois deserve to have their rights respected when it comes to siting of wind turbines that affect their land. Wind turbine organizations have a history of not properly disclosing their siting to adjacent property owners and not putting dollars aside for decommissioning. The devastating impact to a homeowner of the long shadow flicker generated by wind turbines from a neighboring property in rural communities cannot be understated. The situation makes it nearly impossible for neighboring land owners to sell their home or their property. This legislation contains no protections for farmers and rural land owners in Illinois.”

Keicher also asked about a bill currently sponsored by Representative Marcus Evans, D-Chicago, that would allow for wind turbine construction and placement in Lake Michigan, “Norway, the United Kingdom, Netherlands and many others have proven that the durability, productivity and benefits of off shore wind harvesting are not only more viable but their benefit to aquatic life in the manner of artificial reefs and nurseries are incredibly beneficial from top to bottom,” Keicher noted.  “Instead, what we have here is an elitist North Shore Democratic environmentalist agenda that suggests their views of the water are too important to warrant any consideration of placement in Lake Michigan.  Instead, these same elitists are pushing removal of local county siting authority because, well, they seem to feel no one important lives in rural Illinois so it won’t impact anyone’s view way out there.”

There was no dispute of the allegations made regarding the reasons for not including Chicago or Lake Michigan siting of wind turbines raised by the sponsor during debate.  The Illinois Farm Bureau and over 70 Illinois county governments have raised significant concerns and objections but were dismissed as fear mongering by the environmentalists supporting this legislation.  If signed into law by the Governor, the State of Illinois would develop a commission that would oversee and approve wind turbine siting everywhere but Chicago.  Counties would retain the ability to have an up or down vote on the project once presented but if the project is within the newly adopted state guidelines, any county rejection would trigger a lawsuit against the county that would generally favor the wind turbine company.

The House of Representatives voted 73-36 to approve a motion to concur on Senate Floor Amendments No. 1 and No. 4 to House Bill 4412, after which Representative Ann Williams, D-Chicago, filed a Motion to Reconsider, a procedural measure to hold the bill in the House before sending it to the Governor to be signed into law.